When I say I spent my holidays on Ibiza, many believe I staggered through crowded clubs in high-heels, drank overpriced sweet cocktails and slept until noon every day. Not exactly. It’s not that I wouldn’t be interested in a party-hard vacation but I’ve come to realize that Ibiza has so many other things to explore than just its incredible night life.

Pronounced as “Evissa”, Ibiza is the second largest Balearic island and was even selected as UNESCO world heritage site, attracting more than six (!) Million tourists every year. There are around 57 beaches of which I’ve approximately seen one fourth. Naming my favorites is difficult but I would probably list them as follows: Es Cavallet, Sunset Ashram, Blue Marlin and Experimental Beach. The soft, almost white sand and blue-green color of the sea spread an unbelievable feeling of calmness from head to toes and listening to the waves is even better than my current Spotify playlist. I enjoy watching the Instagram-like glamorous, sparkling crowd from afar while sipping sangria con cava with crushed berries and ice and letting the sun kiss my office pale skin.

Jellyfish? Yes. Existing and painful. I’ve watched the most interesting reactions to their stings. Some rush to pour vinegar on their wounds, some use special pain-soothing cream, others actually find the courage to pee on the irritated spot. I belong to those who let out a high-pitch scream (very similar to a dog when stepped on its tail) and then run to the next Baywatch guy, sobbing hysterically and begging for a medical cure. Afterwards I obviously tell everyone that it didn’t hurt at all.

Avoiding to return to Austria without at least having attended ONE party, we spend a night at Ushuaïa, watching David Guetta at his best, framed by amazing fireshows and extravagante artists. I was told beforehand that the concert would be super commercial.
Agreed.
Would I go again?
Abso-freakin’-lutely. 😉

I used to get furious about people who discover a nice restaurant and then go to the same place every single night (yes, you mom :-)). But suddenly we had become exactly one of those people. We found an amazing little place with a fire-grill named „El Pulpo“. In no time, the waiters knew our names, heritage, and preferred wine. So nearly every evening, we enjoyed grilled fish or steak with juicy vegetables and fresh tomato salad until we happily dropped to bed with the strongest garlic breath underneath the moon.

Time on the island flies – ten days passed so quickly that I didn’t even manage to finish reading a single book. We spend the last night at the “Heart” in Ibiza – from the outside; a normal looking casino, club and restaurant in one and from the inside, a mystical, dark red and vibrant place. The menu is based on molecular kitchen in the style of Adrian Ferran; tiny portions followed by ultimate taste explosions. There’s live music and incredible dancers, lobster and beef served on huge plates, followed by coconut ice-cream and dripping chocolate covered cherries.

The next morning, we find it hard to pack our bags and drive towards the airport. The only comforting thought while boarding the plane is that the next summer will come and Ibiza won’t stand a chance without us.

Madrid. Probably the only city you can walk around with Tenosynotivits (a painful cord infection close to the ankle) and actually not feel any pain. Too distracted by numerous local shops, street artists, dripping ice cream, incomprehensible conversations and the sound of Spanish music dancing through the streets.

Planning a whole afternoon with dense sightseeing, we immediately end up in a street café overlooking the city next to the Royal palace of Madrid, sipping fresh Sangria and nibbling salty chips. The city seems to be just as laid back as we feel, sitting deep in our wood woven chairs, absorbing the calmness. There is no rush, it’s seems as though time has a different meaning and hours pass without even the tiniest tinge of guilt. After tasting a couple of national specialties and wiping the grease from our fingers, we head into a crowded salsa bar.The scene is fantastic – men and women swirling lightly on the dance floor as we watch them in awe, our feet glued to the floor, clutching our mojitos to feel a little less out of place. After a while, we are also challenged to dance and as the sweet rum kicks in, we let go of our fear and give into the rhythm, forgetting our sorrows until the morning rises.

The next day – after crawling out of bed to a time I will not admit to in public – we manage to start our initial plan and have brunch at a tiny local place with terrible service but wonderful food. Afterwards, we join a free walking tour. Strolling along the Gran Via, Plaza Major and Retiro Park, we finally stumble into the most amazing place called Café del Círculo de Bellas Artes. This is a breathtaking rooftop bar, with soft, white deck chairs overlooking the entire city. We order more Sangria and watch the sun slowly sink between the roofs of Madrid.

The time in Spain was too short. It felt as though we had barely landed and were already packing our things. On the plus side, this is just another good reason to return. 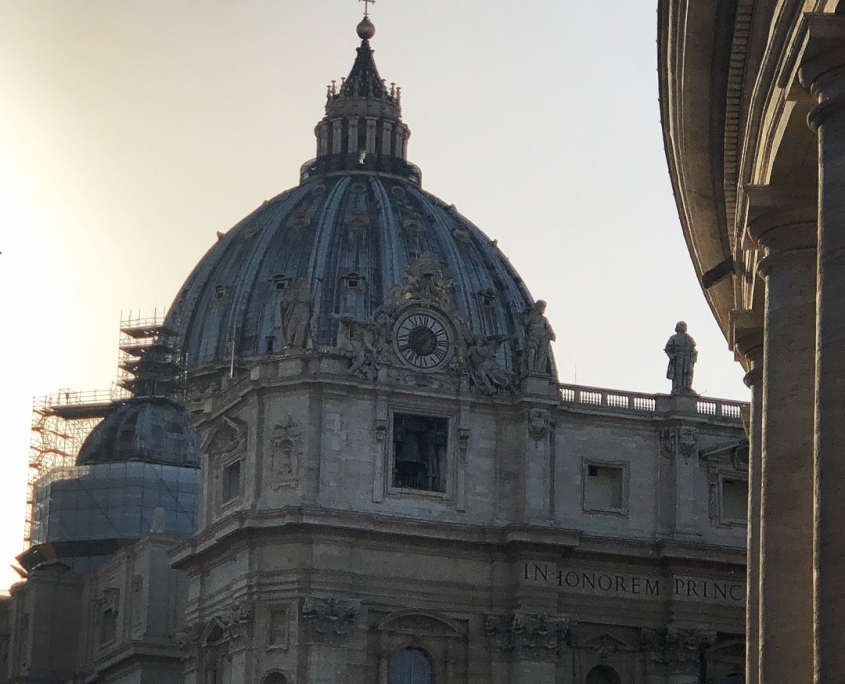 This is my report to you from the first capital of the United States, the “Big Apple”, originally named so by musicians meaning to play the „Big Time“ in New York City. Finally, after years of dreaming and talking about this and endless applications, I have come to the city that never sleeps. And it is true. New York is the busiest, loudest and most colourful place I’ve ever seen. Even though this city has 922 miles of subway tracks, I try to avoid the underground Sahara-like degrees and prefer to walk those 30 minutes to work every day. In doing so I have the chance to catch a glimpse of the very first sun-rays peeking through the gigantic skyscrapers and to wake up with hundreds of busy New Yorkers. I watch gorgeous models with long wavy hair, their high heels clicking as they clutch their bags underneath their skinny, twig arms. I spot millions of Asians, selling newspapers, bubble-gum, smoothies or hot tasteless coffee. On one side, there are sharp-dressed business men, wearing shiny black shoes and stiff ties, while they are pushing against the crowd, their minds racing just like their legs. On the other side, I catch sight of sportsmen, muscles fletching, wearing shirt that are just a little bit too tight. I spot kippahs, hijabs and beautiful, long saris. It’s multicultural, and diverse. Throughout its history, New York City has been a major point of entry for immigrants and as many as 800 languages are spoken here.

They say that more than two-thirds of adults in the United States are overweight or obese? Given the fact that you are almost knocked over by tasty temptations, I believe they handled it pretty well. It’s truly fascinating. No matter where you go or what time it is in Manhattan, you will always have the choice between authentic Mexican, spicy Indian, greasy Italian or a simple sappy American burger. You can order your dish vegan, gluten- or lactose free; therefore no one really has a waterproof excuse not to find something they might regret later on. Further, I notice a rare nicotine addiction and dirty, mean looks if you happen to stand on the sidewalk in front of a bar, thoughtlessly lighting up a cigarette because the overpriced, sweet white wine has quickly gotten to your head.

According to statistics, almost 40% of New Yorkers are single. Even through all the hustle and rush on the streets they still find the time to gaze at each other and it seems to me as if people here are constantly trying searching for something. Or someone. Maybe to feel less lonely in between those 8,5 Million people. Interestingly, I barely notice a family or children, not to mention older people. It almost seems to me as if this is the perfect place to come, live and leave.

It’s a wonderful time to be in this city. The summer doesn’t seem to come to an end, the winter is just a thought, still hanging in the back-most part of our closets. The 70th Session of the UN General Assembly has taken place. Obama still knows how to inspire, Putin exasperates and Ban tries to pour oil on troubled waters. I am observing, listening and living the moment.